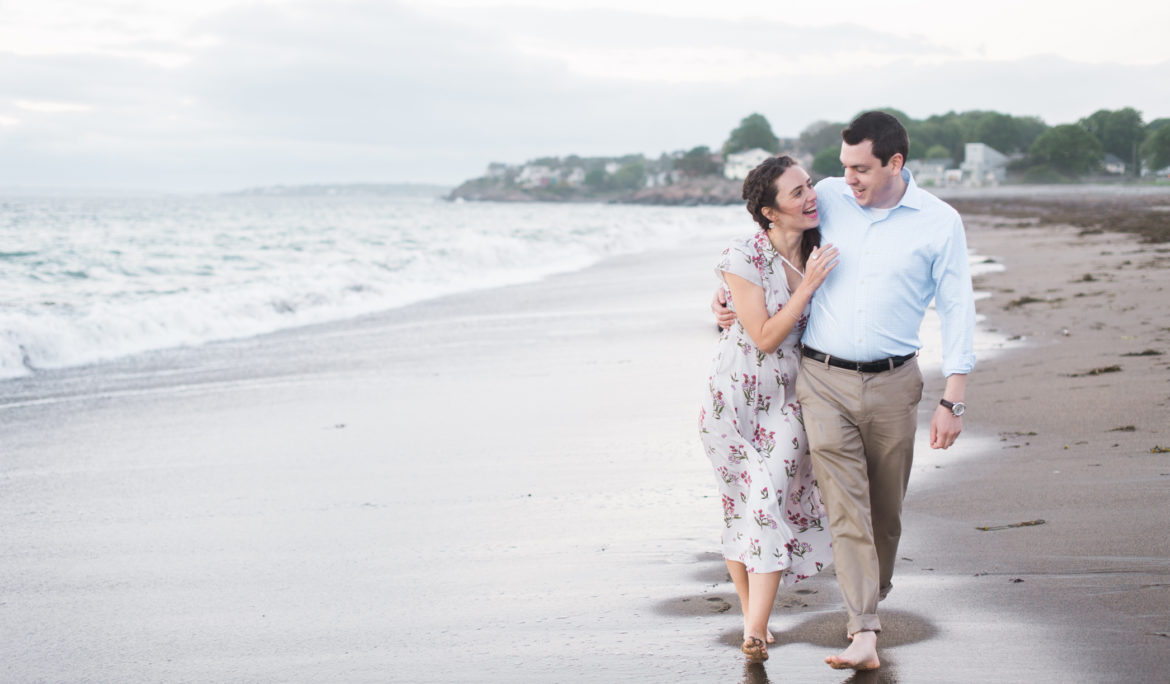 Love can go the distance – Kerrie believes that and you should too. Learn how Kerrie met Ted and how he coaxed her into moving to the U.S. with coffee, peanut butter and lots of charm.

This post originally appeared on The Life + Style of Kerrie M. Burke

Whenever people realize that I’m Irish (or rather accept that I’m Irish – apparently I don’t have a very strong accent) the first question is inevitably “What you brought you here?” As you can imagine, my answer is always the same “A boy. A boy and peanut butter” – seriously though you guys put that stuff in everything and I love ya for it.

Once I eventually get around to explaining that I am in fact married to said boy (we’ve been together almost ten years now – sh*t that makes me feel old) and that he was in fact born and raised here in the US the next question is obviously “how did you guys meet?” Believe it or not, this is a this question I get most every day and I’ve been planning to share our story, or at least a little part of it, for years now (#procrastinationnation) so when my friends at E.B. Horn recently challenged me to do just that it was exactly the kick in the tush I needed. I warn you, today’s post is one that requires a cosy seat and a mug of coffee but here goes . . .

If you’ve been following along on insta then 1. I adore you and 2. I apologize because you may already know this but Ted and I actually met in college when he chose to complete a semester abroad.

I know, I know, it’s so sweet and romantic and fate was obviously on our side – trust me, I’ve heard all the “oohs and ahhs” before. Truth be told, they’ve always kind of embarrassed me. Maybe it’s because I’m a realist (or as the hubby likes to put it “cynical AF” – as warm and friendly as we can be, the Irish are generally very negative) and have never really bought into the whole romance thing. Judge me if you will but I’ve always been the type who believes 99.9% of “grand” or romantic gestures are made by guys in a not-nearly-as-clever-as-they-think attempt to sleep with a gal. I’m not saying I’m right and it’s certainly possible I should have movies like American Pie left me traumatized but there ya go.

There’s no denying it, it truly is crazy that Ted ended up in Ireland, it’s crazy that he chose to attend my school (NUIG) and it’s really crazy that we both ended up at a Surf-Soc party considering neither of us actually surf – in fact, I can just about flail wildly in water deeper than 6 inches. All of this however being said, romance and co. had some stuff competition from a little thing called reality – and perhaps serving or two of teen drama!

The only reason I was at that party? I was hoping my ex-boyfriend of three years (a lifetime when you’ve yet to celebrate the big 2-1) would hear about it and quickly be driven insane with jealousy – wow, that’s one seriously embarrassing confession. We’d broken up multiple times in the few weeks leading up to that fateful, beer-soaked house party and I genuinely think both of us were convinced that we’d work things out in the end. Again, I’m not the most romantic girl but I’m clearly the smartest – just smile, smile and nod.

Somehow, in between all the fun and festivities (read; standing silently in the corner) I managed to find the time to talk to the equally-out-of-place friend of some pretty-boy who was giving my friend all the feels. Knowing he was feeling as awkward as me, if not more, I naturally attempted to help ease his pain by stonily complimenting him on his all-too-visible comic-book themed underwear – “hey you, I can see your knickers!”

Having clearly proved that I’m as charming as I am ravishing, comic-book-underwear-guy (A.K.A. Ted) and I ended up swapping numbers before going our separate ways that night and guess what? He never bothered to message me. Can you believe that? Luckily for him, I was so insulted (and so irritated with my ex) that I finally reached out to demand he buy me coffee. Well, not only did he do that but he admitted that he’d wanted to text but was way too shy.

A few caffeine-fueled dates later, it suddenly occurred to me that I wasn’t thinking about or missing Diarmuid any more. Instead, I was enjoying (more than I ever would have guessed) spending time with the guy desperately trying to soak the hot tea he’d just spilled all over his crotch lap – we have yet to find out if that’s done any permanent damage. Just as suddenly however, it occurred to me that we only had one semester together and the thought terrified me. Deciding it would be best to just “rip off the band-aid” I immediately decided that was it for us.

After that, it didn’t matter how many times the guy told me I was crazy or reminded me that no-one else had ever bought me so much coffee, I was determined to block him out. I dedicated the next few weeks to not-so-subtly avoiding the guy on campus and pretending I never got his messages until he finally gave up – or so I thought. Eventually tracking me down at my favorite on-campus coffee shop, Smokey Joes, this pain-in-the-ass expected anything but the “I’m staying, you’re officially out of excuses” she got.

Fast forward ten years plus a few small details (one nerve-wracking move to London, three years in Ireland, an incredibly unexpected proposal and a 65lb addition to the family) and I can’t wait to tell you all about the exciting new chapter we’re about to embark upon – but more about that later. 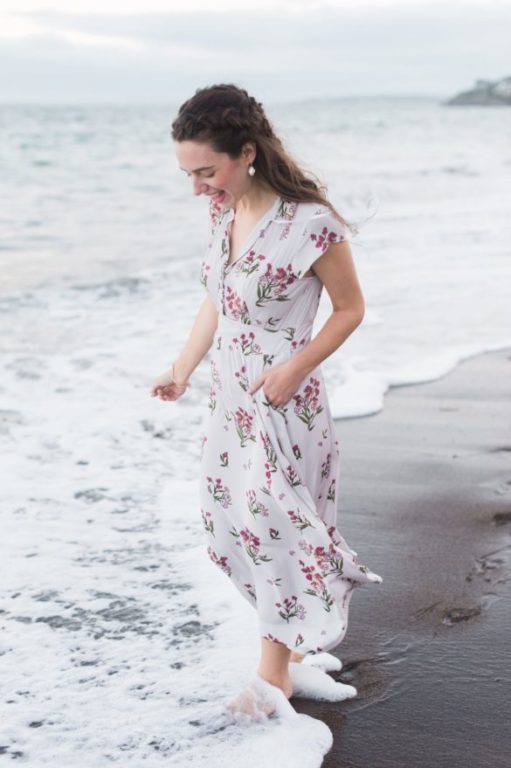 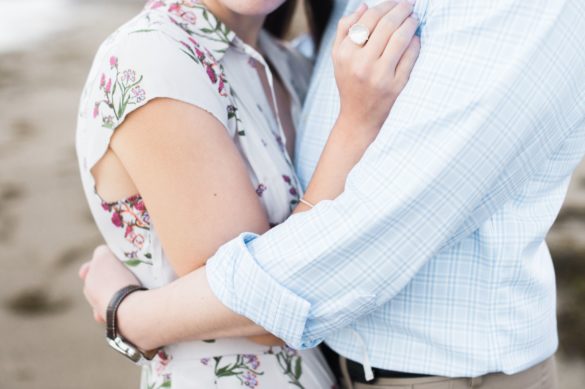 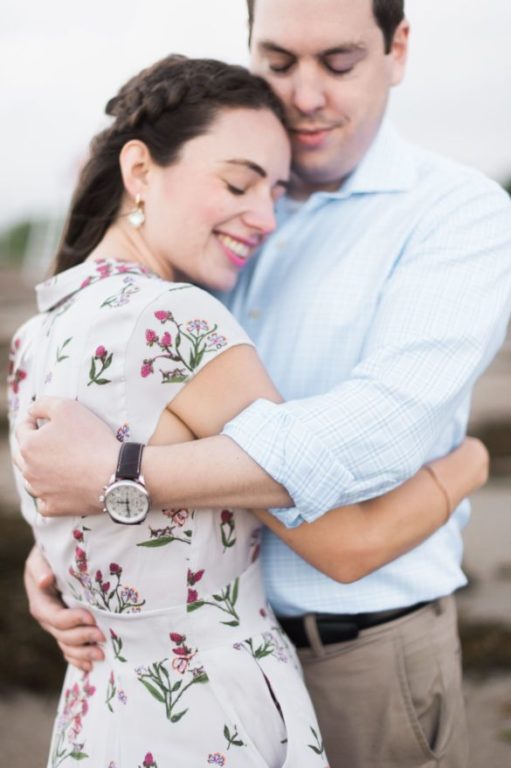 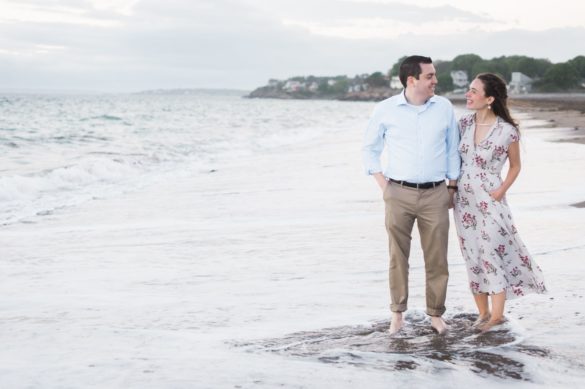 Our Love Story + Wedding Bands
Gifts For Him